Sint Maarten (Dutch pronunciation: [sɪnt ˈmaːrtə(n)]) is an island country in the Caribbean. It is a constituent country of the Kingdom of the Netherlands. With a population of 33,609 on an area of 34 km2 (13 sq mi), it encompasses the southern 40% of the divided island of Saint Martin, while the northern 60% of the island constitutes the French overseas collectivity of Saint-Martin. Its capital is Philipsburg.

Before 10 October 2010, Sint Maarten was known as the Island Territory of Sint Maarten (Dutch: Eilandgebied Sint Maarten), and was one of five island territories (eilandgebieden) that constituted the Netherlands Antilles.

In 1493, during Christopher Columbus' second voyage to the West Indies, upon first sighting of the island he named it Isla de San Martín after Saint Martin of Tours because it was 11 November, St. Martin's Day. However, though he claimed it as a Spanish territory, Columbus never landed there, and Spain made the settlement of the island a low priority.

The French and Dutch, on the other hand, both coveted the island. While the French wanted to colonize the islands between Trinidad and Bermuda, the Dutch found San Martín a convenient halfway point between their colonies in New Amsterdam (present day New York) and Brazil. With few people inhabiting the island, the Dutch easily founded a settlement there in 1631, erecting Fort Amsterdam as protection from invaders. Jan Claeszen Van Campen became its first governor, and soon thereafter the Dutch East India Company began their salt mining operations. French and British settlements sprang up on the island as well. Taking note of these successful colonies and wanting to maintain their control of the salt trade, the Spanish now found St. Martin much more appealing. The Eighty Years' War which had been raging between Spain and the Netherlands provided further incentive to attack.

Spanish forces captured Saint Martin from the Dutch in 1633, seizing control and driving most or all of the colonists off the island. At Point Blanche, they built what is now Old Spanish Fort to secure the territory. Although the Dutch retaliated in several attempts to win back St. Martin, they failed. Fifteen years after the Spanish conquered the island, the Eighty Years' War ended. Since they no longer needed a base in the Caribbean and St. Martin barely turned a profit, the Spanish lost their inclination to continue defending it. In 1648, they deserted the island.

With St. Martin free again, both the Dutch and the French jumped at the chance to re-establish their settlements. Dutch colonists came from St. Eustatius, while the French came from St. Kitts. After some initial conflict, both sides realized that neither would yield easily. Preferring to avoid an all-out war, they signed the Treaty of Concordia in 1648, which divided the island in two. During the treaty's negotiation, the French had a fleet of naval ships off shore, which they used as a threat to bargain more land for themselves. In spite of the treaty, relations between the two sides were not always cordial. Between 1648 and 1816, conflicts changed the border sixteen times. In the end, the French came out ahead with 53 km2 (20 sq mi; 61%) against 34 km2 (13 sq mi; 39%) on the Dutch side.

With the new cultivation of cotton, tobacco, and sugar, the French and the Dutch imported a massive number of slaves to work on the plantations. The slave population quickly grew larger than that of the land owners. Subjected to cruel treatment, slaves staged rebellions, and their overwhelming numbers made them impossible to ignore. In 1848, the French abolished slavery in their colonies including the French side of St. Martin. Slaves on the Dutch side of the island protested and threatened to flee to the French side to seek asylum. The local Dutch authorities relented and emancipated the colonies' slaves. While this decree was respected locally, it was not until 1863 when the Dutch abolished slavery in all of their island colonies that the slaves became legally free.

In 1939, St. Martin received a major boost when it was declared a duty-free port. In 1941, the island was shelled by a German U-boat during World War II. The Dutch side began focusing on tourism in the 1950s, with the French side following suit two decades later. Because of being split up into a Dutch and a French part, the tourist boom was heavier on Sint Maarten than on the surrounding islands. Its Princess Juliana International Airport became one of the busiest in the Eastern Caribbean.

The island's demographics changed dramatically during this period as well. The island's population increased from a mere 5,000 people to around 60,000 people in the mid-1990s. Immigration from the neighbouring Lesser Antilles, Curaçao, Haiti, the Dominican Republic, the United States, Europe, and Asia turned the native population into a minority.

Sint Maarten became an "island territory" (eilandgebied in Dutch) of the Netherlands Antilles in 1983.

Before that date, Sint Maarten was part of the island territory of the Windward Islands, together with Saba and Sint Eustatius. The status of an island territory entails considerable autonomy summed up in the Island Regulation of the Netherlands Antilles. 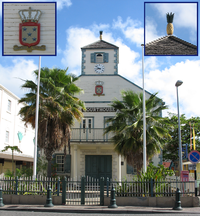 The official languages are Dutch and English. A local English-based creole dialect is also spoken. An annual regatta is also held over 3 days culminating in the first weekend in March. Among the leading cultural artists of the island are Isidore "Mighty Dow" York, kaisonian, panman; Roland Richardson, Impressionist painter; Nicole de Weever, dancer, broadway star; Susha Hien, choreographer; Lasana M. Sekou, poet, author, independence advocate; Clara Reyes, choreographer; Tanny and The Boys, string band music group. The annual Saint Maarten Carnival starts in April and ends in May. The Grand Carnival parade takes place on the Dutch side and is dedicated to the Queen of the Netherlands. 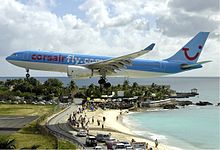 The island is famous for its runway at Princess Juliana International Airport, in which landing aircraft pass within less than 35 meters of Maho Beach below, due to the close proximity of the runway to the ocean. The planes appear to land dangerously close to beach goers. Therefore, this beach and airport has become a popular place for people to view airplane landings.

The Caribbean International Academy founded in 2003 is now the only top preparatory private boarding and day school on the island of St. Maarten. Catering to children from Kindergarten to Grade 12, CIA is also the only school offering Canadian/Ontario High School Diploma (OSSD) and 90% of their graduates go on to attend universities in Europe, Canada and the United States.[27]

The American University of the Caribbean School of Medicine (AUC), founded in 1978, was previously located on Montserrat. Because of the eruption of the Soufrière Hills volcano in 1995, AUC moved its campus to St. Maarten later that year. A permanent campus was completed in 1998 in Cupecoy.

The University of St. Martin (USM) is located in Philipsburg.

Air transportation to Sint Maarten and the whole island is served by Princess Juliana International Airport, which is well known for its very low final approach landings close to a popular beach at the end of the runway. St.Maarten is served by numerous Major , Regional and Commuter Airlines.

Air Sunshines offers service to and from St.Maarten(SXM),San Juan(SJU),St.Thomas(STT),Tortola(EIS),Virgin Gorda(VIJ),Anguilla(AXA),Nevis(NEV),Dominica(DOM) on a regular basis and to other destinations on demand.

St. Maarten's economy is mostly based on tourism, either from tourists staying on the island or day tourists from the many cruise lines that dock in the Philipsburg Harbour.

In 2014, St. Maarten had more gaming machines per resident than any other country in the world.