Saint Lucia :French: Sainte-Lucie) is a sovereign island country in theWest Indies in the eastern Caribbean Sea on the boundary with the Atlantic Ocean.Part of the Lesser Antilles, it is located north/northeast of the island of Saint Vincent, northwest of Barbados and south of Martinique. It covers a land area of 617 km2 (238 square miles) and reported a population of 165,595 in the 2010 census. Its capital is Castries. 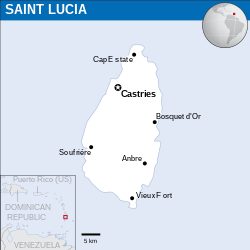 The French were the island's first European settlers. They signed a treaty with the native Island Caribs in 1660. England took control of the island from 1663 to 1667. In ensuing years, it was at war with France fourteen times, and rule of the island changed frequently (it was ruled seven times each by the French and British). In 1814, the British took definitive control of the island.

Representative government came about in 1840 . From 1958 to 1962, the island was a member of the West Indies Federation. On 22 February 1979, Saint Lucia became an independent state and a member of the Commonwealth of Nations.

In the late 1550s, the French pirate François le Clerc (known as Jambe de Bois, due to his wooden leg) set up a camp on Pigeon Island, from where he attacked passing Spanish ships. In 1605, an English vessel called the Oliphe Blossome was blown off-course on its way to Guyana, and the 67 colonists started a settlement on Saint Lucia, after initially being welcomed by the Carib chief Anthonie. By 26 September 1605, only 19 survived, after continued attacks by the Carib chief Augraumart, so they fled the island.

In 1664, Thomas Warner (son of Sir Thomas Warner, the governor of St Kitts) claimed Saint Lucia for England. He brought 1,000 men to defend it from the French, but after two years, only 89 survived with the rest dying mostly due to disease. In 1666, the French West India Company resumed control of the island, which in 1674 was made an official French crown colony as a dependency of Martinique.

Both the British and the French found the island attractive after the sugar industry developed, and during the 18th century the island changed ownership or was declared neutral territory a dozen times, although the French settlements remained and the island was a de facto French colony well into the eighteenth century.

In 1803, the British regained control of the island. Many of the rebels escaped into the thick rainforest where they evaded capture and established maroon communities.

The slavery on the island was continued for a short time, but anti-slavery sentiment was rising in Britain. The British stopped the import of slaves by anyone, white or coloured, when they abolished the slave trade in 1807.

St. Lucia's physical features are notable. Dominated by high peaks and rain forests in the interior, the 616-square-kilometer (238-square-mile) island is known for the twin peaks of Gros Piton and Petit Piton on the southwestern 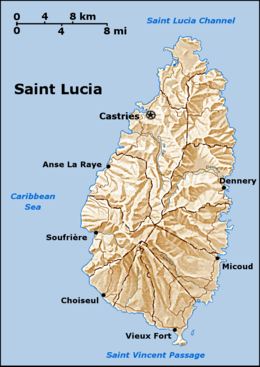 coast, its soft sandy beaches, and its magnificent natural harbors.   Mount Gimie, the highest peak, is located in the central mountain range and rises to 958 meters (3,143 ft) above sea level, a contrast that is also evident in the abrupt climatic transition from coastal to inland areas. The steep terrain also accentuates the many rivers that flow from central St. Lucia to the Caribbean. Fertile land holdings, which support banana farming, are scattered throughout the island.

Saint Lucia is in the tropical zone, although its climate is moderated by northeast trade winds. Since it is fairly close to the equator, the temperature does not fluctuate much between winter and summer. The dry season is from December to June, and the rainy season is from June to November. Average daytime temperatures are around
29 °C (84.2 °F), and average nighttime temperatures are around 18 °C (64.4 °F). Average annual rainfall ranges from 1,300 mm (51.2 in) on the coast to 3,810 mm (150 in) in the mountain rainforest

One of the major tourist areas in St. Lucia, Castries is a port of call for cruise ships.

They dock at Pointe Seraphine, to the north of the harbour. Castries has landmarks, such as the Cathedral of the Immaculate Conception, Derek Walcott Square (renamed from Columbus Square to honor the island's Nobel Prize-winning poet, Derek Walcott), the City Library, the Government House, and Fort Charlotte, at the top of Morne Fortune (an 845-foot or 258 meter hill). Beaches include Vigie Beach, Malabar Beach, Choc Beach, and La Toc Beach. 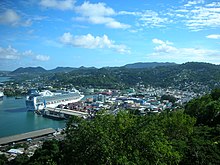 Standard bus routes run from Castries to all outlying districts on the island. The buses are private (not subsidized by government) bearing green license plates with numbers that start with an M—for example, M456. The buses line up in designated areas to pick up passengers. The bus fronts displays a route band, a luminescent sign that indicates which part of the island the bus is traveling to.

To get to other areas, one can use the buses or the taxi service, which have blue license plates. Buses are the most affordable, local way of getting around St, Lucia and great way to experience island life, There is no schedule, simply wave them down along the main road and pay when you get off.