Excerpts From Wikipedia, the free encyclopedia

Saint Kitts, also known more formally as Saint Christopher Island, is an island in the West Indies. The west side of the island borders the Caribbean Sea, and the eastern coast faces the Atlantic Ocean. Saint Kitts and the neighbouring island of Nevis constitute one country: the Federation of Saint Kitts and Nevis. Saint Kitts and Nevis are separated by a shallow 3-kilometre (2 mi) channel known as "The Narrows".

Saint Kitts has a population of around 57,000, the majority of whom are mainly of African descent. The primary language is English, with a literacy rate of approximately 98%. Residents call themselves Kittitians.

There are nine parishes on the island of St. Kitts:

Brimstone Hill Fortress National Park, a UNESCO World Heritage Site, is the largest fortress ever built in the Eastern Caribbean. The island of Saint Kitts is home to the Warner Park Cricket Stadium, which was used to host 2007 Cricket World Cup matches. This made St. Kitts and Nevis the smallest nation to ever host a World Cup event. Saint Kitts is also home to several institutions of higher education, including Ross University School of Veterinary Medicine, Windsor University School of Medicine, and the University of Medicine and Health Sciences.

The capital of the two-island nation, and also its largest port, is the town of Basseterre on Saint Kitts. There is a modern facility for handling large cruise ships there. A ring road goes around the perimeter of the island with smaller roads branching off it; the interior of the island is too steep for habitation.

Saint Kitts is 10 km (6.2 mi) away from Sint Eustatius to the north and 3 km (1.9 mi) from Nevis to the south. St. Kitts has three distinct groups of volcanic peaks: the North West or Mount Misery Range; the Middle or Verchilds Range and the South East or Olivees Range. The highest peak is Mount Liamuiga, formerly Mount Misery, a dormant volcano 1,156 m high. 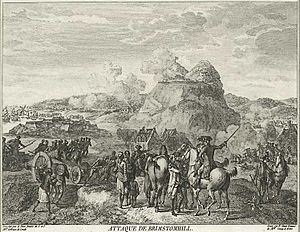 Siege of Brimstone Hill, 1782, as described by an observer in a French engraving titled "Attaque de Brimstomhill".

During the last Ice Age, the sea level was 200 feet (61 m) lower and St. Kitts and Nevis were one island along with Sint Eustatius (also known as Statia).

St. Kitts was originally settled by pre-agricultural, pre-ceramic "Archaic people", who migrated south down the archipelago from Florida. In a few hundred years they disappeared, to be replaced by the ceramic-using and agriculturalist Saladoid people around 100 BC, who migrated to St. Kitts north up the archipelago from the banks of the Orinoco River in Venezuela. Around 800 AD, they were replaced by the Igneri people, members of the Arawak group.

Around 1300, the Kalinago, or Carib people arrived on the islands. These war-like people quickly dispersed the Igneri, and forced them northwards to the Greater Antilles. They named Saint Kitts "Liamuiga" meaning "fertile island", and would likely have expanded further north if not for the arrival of Europeans.

A Spanish expedition under Christopher Columbus arrived and claimed the island for Spain in 1493. A short-lived French Huguenot settlement was established at Dieppe Bay in 1538.

The first English colony was established in 1623, followed by a French colony in 1625. The English and French briefly united to massacre the local Kalinago (preempting a Kalinago plan to massacre the Europeans), and then partitioned the island, with the English colonists in the middle and the French on either end. In 1629, a Spanish force sent to clear the islands of foreign settlement seized St. Kitts. The English settlement was rebuilt following the 1630 peace between England and Spain.

The island alternated repeatedly between English (then British) and French control during the 17th and 18th centuries, as one power took the whole island, only to have it switch hands due to treaties or military action. Parts of the island were heavily fortified, as exemplified by the UNESCO World Heritage Site at Brimstone Hill and the now-crumbling Fort Charles.

The island originally produced tobacco; but it changed to sugar cane in 1640, due to stiff competition from the colony of Virginia. The labour-intensive cultivation of sugar cane was the reason for the large-scale importation of African slaves. The importation began almost immediately upon the arrival of Europeans to the region.

August the 1st is now celebrated as a public holiday and is called Emancipation Day. In 1883, St. Kitts, Nevis, and Anguilla were all linked under one presidency, located on St. Kitts, to the dismay of the Nevisians and Anguillans.

Anguilla eventually separated out of this arrangement, in 1971.

Sugar production continued to dominate the local economy until 2005, when, after 365 years of having a mono-culture, the government closed the sugar industry. This was due to huge losses and European Union plans to greatly cut sugar prices.

For hundreds of years, St. Kitts operated as a sugar monoculture, but due to decreasing profitability, the government closed the industry in 2005. Tourism is a major and growing source of income to the island, although the number and density of resorts is less than many other Caribbean islands.

St. Kitts is dependent on tourism to drive its economy. Tourism has been increasing since 1978. In 2009, there were 587,479 arrivals to Saint Kitts compared to 379,473 in 2007, which represents an increase of just under 40% growth in a two-year period. As tourism grows, the demand for vacation property increases in conjunction.

The narrow-gauge (30 inches[) St Kitts Scenic Railway circles the island and offers passenger service from its headquarters near the airport, although the service is geared more for tourists than as day-to-day transportation for residents. Built between 1912 and 1926 to haul sugar cane from farms to the sugar factory in Basseterre, since 2003 the railway has offered a 3.5 hour, 30-mile circle tour of the island on specially designed double-decker open-air coaches, with 12 miles of the trip being by bus.