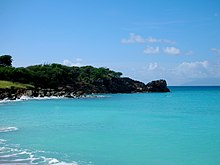 Antigua (/ænˈtiːɡ(w)ə/ ann-TEE-g(w)ə), also known as Waladli or Wadadli by the native population, is an island in the West Indies. It is one of the Leeward Islands in the Caribbean region and the main island of the country of Antigua and Barbuda. Antigua and Barbuda became an independent state within the Commonwealth of Nations on 1 November 1981.

Antigua means "ancient" in Spanish. The name Waladli comes from the indigenous inhabitants and means approximately "our own".The island's circumference is roughly 87 km (54 mi) and its area 281 km2 (108 sq mi). Its population was 80,161 (at the 2011 Census). The economy is mainly reliant on tourism, with the agricultural sector serving the domestic market.

Over 32,000 people live in the capital city, St. John's. The capital is situated in the north-west and has a deep harbour which is able to accommodate large cruise ships.

English Harbour on the south-eastern coast provides protected shelter during violent storms. It is the site of a restored British colonial naval station named "Nelson's Dockyard" after Admiral Horatio Nelson. English Harbour and the neighbouring village of Falmouth are yachting and sailing destinations and provisioning centres. During Antigua Sailing Week, at the end of April and beginning of May, an annual regatta brings a number of sailing vessels and sailors to the island to take part in sporting events.

The first inhabitants were the Guanahatabey people. Eventually, the Arawak, followed by the Carib. Prior to European colonialism, Christopher Columbus was the first European to visit Antigua, in 1493.

The Arawak were the first well-documented group of indigenous people to settle Antigua. They paddled to the island by canoe (piragua) from present-day Venezuela, pushed out by the Carib, another indigenous people. The Arawak introduced agriculture to Antigua and Barbuda. Among other crops, they cultivated the Antiguan "Black" pineapple. They also grew Corn, Sweet potatoes (white with firmer flesh than the bright orange "sweet potato" grown in the United States), Chili peppers, Guava, Tobacco, and Cotton.

Some of the vegetables listed, such as corn and sweet potatoes, continue to be staples of Antiguan cuisine. Colonists took them to Europe, and from there, they spread around the world. For example, a popular Antiguan dish, dukuna (/ˈduːkuːnɑː/), is a sweet, steamed dumpling made from grated sweet potatoes, flour and spices. Another staple, fungi (/ˈfuːndʒi/), is a cooked paste made of cornmeal and water.

Most of the Arawak left Antigua about A.D. 1100. Those who remained were raided by the Carib coming from Venezuela. According to The Catholic Encyclopedia, the Caribs' superior weapons and seafaring prowess allowed them to defeat most Arawak nations in the West Indies.

The indigenous people of the West Indies built excellent sea vessels, which they used to sail the Atlantic and Caribbean resulting in much of the South American and the Caribbean islands being populated by the Arawak and Carib. Their descendants live throughout South America, particularly Brazil, Venezuela and Colombia. 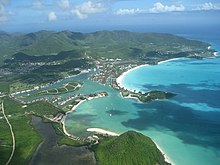 Aerial view of Jolly Harbour on the western coast of Antigua.

In 1632, a group of English colonists left St. Kitts to settle on Antigua. Sir Christopher Codrington, an Englishman, established the first permanent British settlement.The island rapidly developed as a profitable sugar colony. For a large portion of Antigua history, the island was considered Britain's "Gateway to the Caribbean". It was located on the major sailing routes among the region's resource-rich colonies. Lord Horatio Nelson, a major figure in Antigua history, arrived in the late 18th century to preserve the island's commercial shipping prowess. 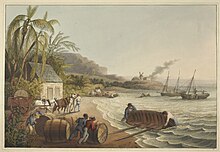 Sugar became Antigua's main crop in about 1674, when Christopher Codrington (c 1640-1698) settled at Betty's Hope plantation. He came from Barbados, bringing the latest sugar technology with him. Betty's Hope, Antigua's first full-scale sugar plantation, was so successful that other planters turned from tobacco to sugar. This resulted in their importing slaves to work the sugar cane crops.

Sugar cane was one of the most grueling and dangerous crops slaves were forced to cultivate. Harvesting cane required backbreaking long days in sugar cane fields under the hot island sun. Sugar cane spoiled quickly after harvest, and the milling process was slow and inefficient, forcing the mill and boiling house to operate 24 hours a day during harvest season.

By the mid-1770s, the number of slaves had increased to 37,500, up from 12,500 in 1713. The British population had fallen from 5,000 to below 3,000. The slaves lived in wretched and overcrowded conditions and could be mistreated or even killed by their owners with impunity. The Slave Act of 1723 made arbitrary murder of slaves a crime, but did not do much to ease their lives.

The American War of Independence in the late 18th century disrupted the Caribbean sugar trade. At the same time, public opinion in Great Britain gradually turned against slavery. Great Britain abolished the slave trade in 1807, and all existing slaves were emancipated in 1834.

Following the foundation of the Ulotrichian Universal Union, a friendly society which acted as a trade union (which were banned), the sugar cane workers were ready to confront the plantation owners when they slashed their wages. The cane workers went on strike and rioted when their leaders were arrested.

In 1968, with Barbuda and the tiny island of Redonda as dependencies, Antigua became an associated state of the Commonwealth, and in 1981 it was disassociated

The country's official currency is the East Caribbean dollar. Given the dominance of tourism, many prices in tourist-oriented businesses are shown in US dollars. The EC dollar is pegged to the US dollar at a varied rate and averages about US$1 = EC$2.7.